Hello, everyone. Sorry I haven't posted much but I wanted to just spend some time with family and just chill out over Christmas. Hope you all had a nice Christmas and are looking forward to 2016!  I have a long, serious-ish post for you today. I don't know if you've heard by now but there's been hundreds of articles about Zoe Sugg (aka Zoella) and Alfie Deyes (aka Pointlessblog), or Zalfie as people know them, tweeting asking for some privacy after seeing people outside their home. 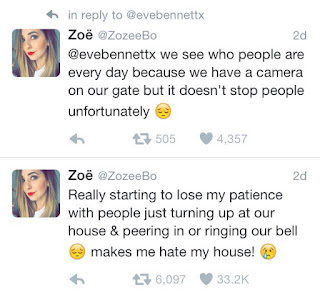 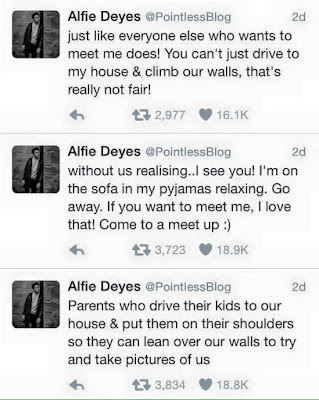 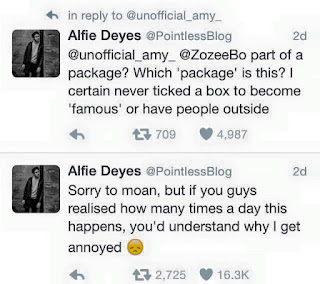 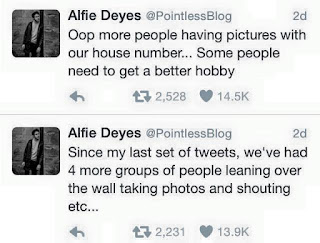 I wanted to talk about was whether Youtubers and celebrities deserve their privacy. Personally, I think they do. Of course they do! But other people don't seem to think so. Some people say that the couple are just moaning about the price of fame and others say that they should've known that this was going to happen considering their career choice. I don't think that justifies people peering into Zalfie's home or waiting to get pictures. It's a complete invasion of their privacy.

I've spoken before about what I think of YouTubers and them bringing out books and their so called fame. Apart from Mamrie Hart's and Shane Dawson's (which I reviewed), I don't like the idea of YouTubers releasing books because it's just making money off of their young audiences. For example, Alfie's Pointless books are just rip-offs of the Wreck-It Journal but it's what he wants to do. I appreciate Zoella's hard work because she is a role model for young children especially over anxiety disorders, she's also released a beauty range and a couple of books as well.

I may not always agree with certain YouTubers becoming famous for the sake of it but I can appreciate that they work hard for their money but that doesn't mean I agree with them having wax figurines made of them. Of course, most aspects of Zoe's life are public but that's her job. But when she's at home, she shows us only what wants us to see and she doesn't want to be on camera all the time!

Just because they document their lives through daily vlogging doesn't give people the right to come to their home and practically stalk them! It's happened to other YouTubers. For example, I watch Jenna Marbles and her boyfriend Julien Solomita and Julien vlogged about a moment when a parent actually brought their kids right to Jenna and Julien's front door and demanded pictures which left Jenna a bit shaken because it was at night time and the mother was very demanding and refused to leave without a picture.

It's the same with celebrities. They are constantly photographed everywhere they go and have ridiculous articles printed about them. I have seen at least 3 articles today about celebrities relaxing on holiday with headlines like "OMG SEE SO-AND-SO'S BARELY THERE BIKINI BOTTOMS!" "SO-AND-SO RELAXING ON HOLIDAY SHOWING OFF THEIR BELLY". It is so invasive and ridiculous. Yes, I can understand people's thinking that fame comes with a price; your privacy isn't private anymore. But that doesn't mean it's right.

I can understand it may be difficult for a young fan to know where to draw the line because they can communicate with their favourite celebrities via Twitter, YouTube, Facebook and other social media platforms. But I'd like to think that it's common sense to not go directly to a person's house and wait for hours/peer in the windows. Especially when it's parents who should know better. A home is a person's sanctuary, a place of safety and it's sad to see someone, like Zoella, feel unhappy in a home they've worked hard for.

At the end of the day, celebrities and YouTubers are just humans like us. They are lucky to be doing things that they love for a career but that doesn't mean their privacy should disappear alongside that. Like Alfie says, if you want to see your idol, go to a meet up, tweet them etc. Yes, there a few sacrifices that a famous person has to make but having uninvited individuals stalk you in your own home shouldn't be one of them.

What do you think about this? All opinions are welcome here.
Do you agree with me? Maybe disagree? Let me know!