Film Review: A Million Ways To Die In The West. 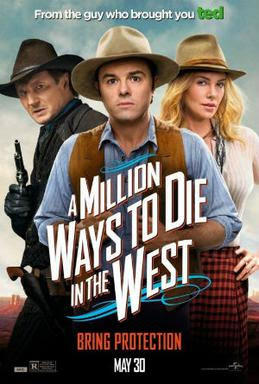 A Million Ways to Die in the West is an American western, comedy film produced, written and directed by the hilarious Seth MacFarlane (the creative genius behind TV's Family Guy, American Dad and the box office hit Ted) as well as Alex Sulkin and Wellesley Wild. MacFarlane stars in it himself alongside a star studded cast including Charlize Theron, Liam Neeson, Amanda Seyfried, Neil Patrick Harris and Sarah Silverman.
It is about a a sheep farmer called Albert (Seth MacFarlane) who is rather cowardly and has never fired his gun resulting in his fickle girlfriend, Louise (Amanda Seyfried), leaving for another man, Foy (Neil Patrick Harris), who owns the town's leading moustache emporium. Albert ends up accidentally saving a beautiful woman's life, Anna (Charlize Theron), who helps him find his courage and learn to fight for himself, her husband however, a notorious outlaw called Clinch (Liam Neeson), arrives seeking revenge..

I thought the film was pretty good if we're talking about comedy whereas the storyline was obvious and predictable. Nevertheless Seth MacFarlane had the jokes firing in every scene.. I wouldn't recommend seeing it if you're easily offended, just saying. There are a probably few too many fart and diarrhea gags made but they somehow still keep you laughing all the way through. Although MacFarlane had most of the screen time, Charlize Theron really pulled off the jokes whenever she could which leaves you surprised that she hasn't done more comedy films before. Neil Patrick Harris is fantastic as he is depicted as the horrible girlfriend stealer while sporting an amazing moustache I have to say. His wit and moments in the films are really laugh-out-loud and leave you wanting more from him.

There isn't much to say about the film as aforementioned it is predictable and you're aware of this the minute Theron's character steps onto the scene. But there were some random but fantastic cameos that make you enjoy the film for what it is. I especially two or three!

I have been a fan of Seth MacFarlane's Family Guy and American Dad but this film doesn't quite match up to the outrageously hilarious Ted where MacFarlane voices Mark Wahlberg's fuzzy teddy bear friend. This film is obviously a mixed bag but clearly there is a market in which it'll please. There was a quality cast even if the storyline itself wasn't matching the same standards.. but it's worth watching, even if it's just once!

I'm not sure if this will help warm any MacFarlane haters up to him but the guy knows what he does best and what he does best is make shocking and offensive yet witty films and shows and I doubt that is about to change anytime soon. This film wasn't amazing but I don't think it was ever expected to be but I still remain a fan of him and his work. His raunchy parody won't turn many into fans of him but it shows that he's quite the outrageous quick-draw satirist.